As one of Ethiopia’s less-visited national parks, the Bale Mountains can be accessed by Africa’s highest all-weather road – making for some of the most picturesque views of southeastern Ethiopia.

The spectacular road from Goba south to Dolo-Mena crosses the eastern part of the Bale Mountains National Park and the Sanetti Plateau. It is the highest all-weather road in Africa and boasts stunning mountain scenery, that can be viewed from the comfort of your vehicle.

You can also see fantastic wildlife. The Semien fox, despite its name, is more common in Bale than it is in the Simiens. Mountain Nyala are endemic and a magnificent sight, particularly the old bulls with their fine-spiraled horns. The body colour of an old male is dark grey, with a line of long hair along the back forming a straggly mane which continues along the spine as a brown and white crest.

The road climbs up from Goba through beautiful juniper and the Hagenia forest and is lined with orange-blossomed leonotis. In the wet season the “Red Hot Poker” blooms beneath the trees and attracts the brilliant iridescent Tacazze and malachite Sunbirds.

As you leave the forest, you come into vast heather (Erica) moorlands which can grow 30ft high. Continuing along the plateau, which has numerous shallow alpine lakes, you’ll experience views to the steep-sided volcanic plug of Konteh Tullu in the south, and the long craggy ridges of Mt. Batu in the west.

The road continues climbing gently, to the centre of the best area for seeing Semien fox, and on rare occasions small groups of Mountain Nyala. Here, you are at over 4,000m above sea level, and in pure, clear cool mountain air with views in all directions on a clear day. The road then skirts around the base of Tullu Dimtu and continues south to the edge of the Harenna escarpment, forty kilometres from Goba.

Only three primate species have been found in the Bale Mountains. The black and white colobus monkey is common wherever there is suitable forest habitat. The olive baboon is also found in large numbers in the Harenna forest.  Surprisingly one troop exists in the high mountain area in the Lava Flows at over 3,700 m altitude. The small grivet monkey is found only in the Harenna forest at altitudes lower than 3,000 m. They are sometimes seen from the Goba to Dolo Mena road as you drive through.

There are also duikers, bushbuck, reedbuck, klipspringers, warthogs and rock hyraxes, and a plethora of birds, including the thick-billed raven, wattled Ibis, blue-winged goose, and Rouget’s rail.

Catch a glimpse of the endemic Ethiopian wolf 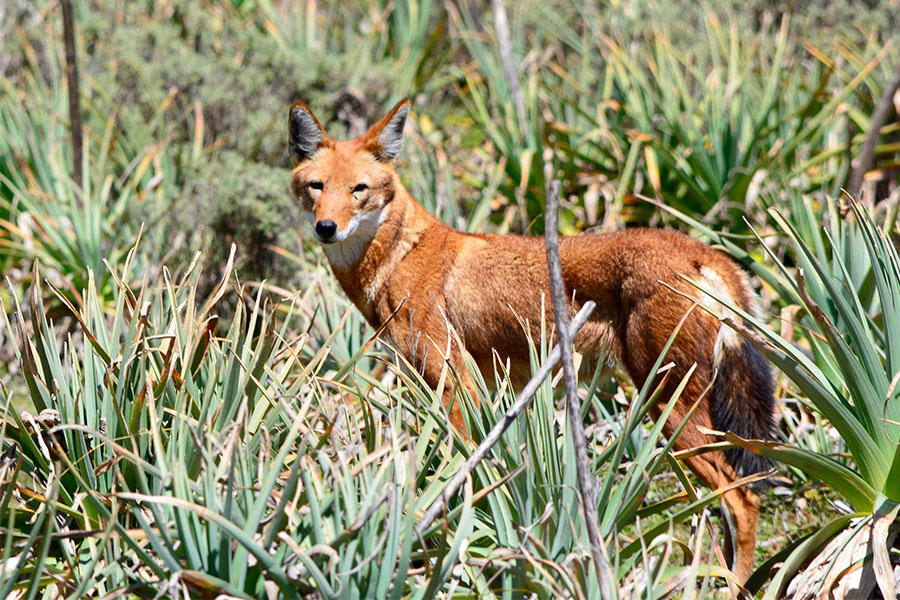 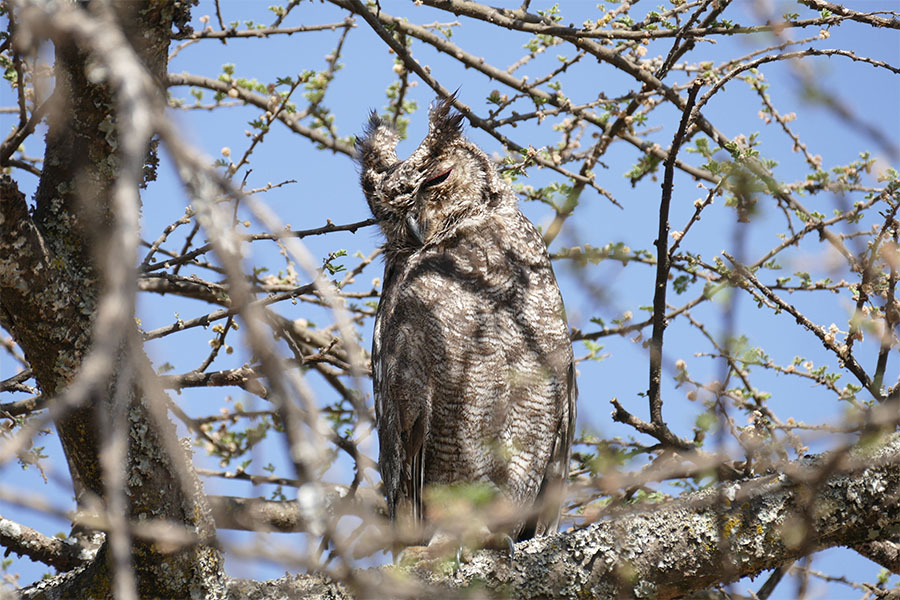 It is important to visit the Bale Mountains at the right time of year. As it is a high altitude mountainous region, it’s characterised by sparkling sunny weather with brilliant blue skies as well as severe periods of rainfall.

The year can be roughly divided into three seasons; the dry, early wet and wet season. The dry season is the best time for horse trekking and walking and usually falls from November to February. It gets very hot during the day, but the nights are star-filled, clear and cold, usually with heavy ground frosts.

The early wet season lasts from March to June, and about two-thirds as much rain falls in this period as in the wet season from July to October. Throughout these eight months, days are generally cooler and nights warmer than in the dry season. Despite the wetter weather, the area can still be enjoyed with adequate warm and weatherproof clothing. Bright sunny periods may be experienced at any time. Snow has been recorded, but does not lie around for very long.

What is the best way to explore the Bale Mountains?

Take the road from Goba south to Dolo-MenaIt. It’s the highest all-weather road in Africa, so expectedly delivers some fantastic views. As the road climbs up from Goba and emerges through Hagenia, you can expect to see beautiful greenery and flowers, as well as wildlife endemic to the area. You can also trek across the mountains, either by foot or horse, which is a great way to really get amongst the natural beauty of the park. Routes can take between 2 to 11 days depending on your preference and ability.

How many days do you need in the Bale Mountains?

The length of your stay depends on what type of travel you decide upon. If you wish to embark on a walking or horse trek trip, we would advise anything from one night (minimum) to up to 11 days, however if you are driving you could spend 1-2 days at accommodation within the park. You can also decide to stay at one particular area in the park and do day trips to various sections of the park, which we would recommend 2-5 days for.

Are the Bale Mountains a suitable destination for children?

Your trip can be made to be entirely suited to your family. There are plenty of treks that can be adapted to any needs or requirements. Visiting the Bale Mountains is a really educational experience for children, particularly if they encounter wildlife that can’t be seen anywhere else in the world.