Gal Oya National Park sets itself apart from others on the island by being the only one you can explore on a boat safari as well as by jeep.

And, if you’re lucky – as we have been – at Gal Oya you may witness the astonishing phenomenon of elephants swimming as they take to the water of Senanayake Samudraya to reach the greenest patches of grass atop rocky islands. The largest inland body of water in the country, the reservoir forms the centre of the park and is surrounded by a wild mix of evergreen forest and dry savannah areas.

There are huge expanses of untouched wilderness at Gal Oya; located in eastern Sri Lanka the park was inaccessible for years due to the civil war and still seems largely forgotten. The scenery is stunning and although shy and sometimes hard to spot, the park hosts most of the animals found on the island.

On a jeep safari in the Nilgala area of the park, once the protectorate of ancient royalty for the abundant medicinal plants and endemic birdlife unique to this ecosystem, you’re likely to see elephant, three species of deer and many bird species. There’s also the option to trek to the Makara river mouth for the chance of seeing wildlife on foot – and then stop there for a cooling dip and picnic lunch.

For adventurous early risers, a one and a half hour uphill trek first thing in the morning is a must. Scrambling over rocks to reach the top of Monkey Mountain you’re rewarded with spectacular views as the sun rises over the distant hills.

The area is also home to some of the last of Sri Lanka’s indigenous people, the Veddas. Traditionally animist hunter gatherers their population and culture is rapidly disappearing but on a walk in the jungle with them there’s the opportunity to learn about their fascinating way of life. 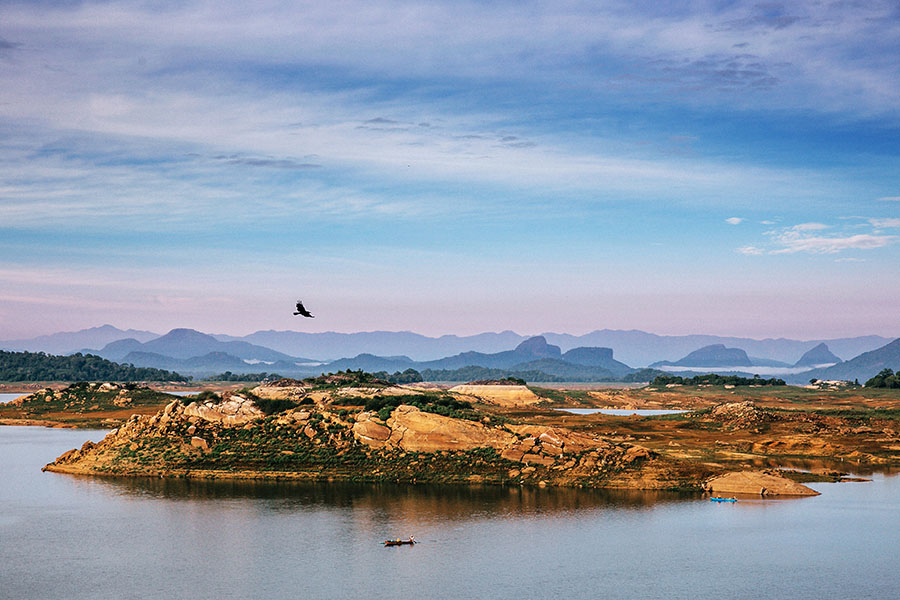 Live among nature in a remote eco lodge 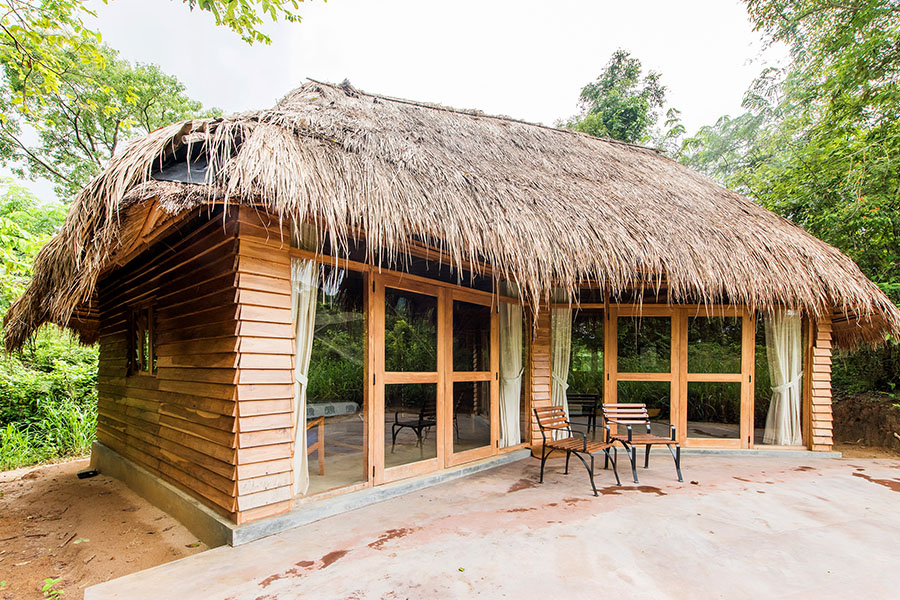 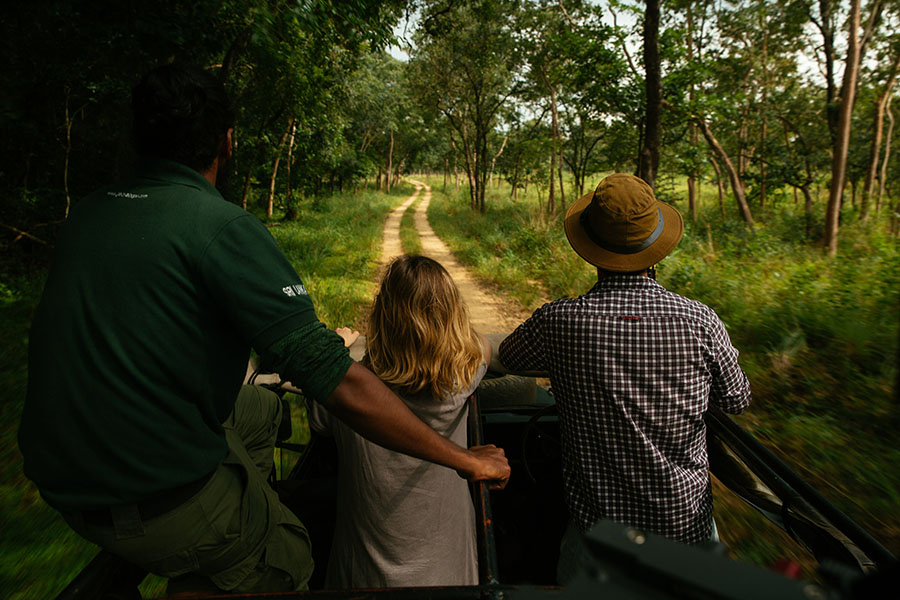 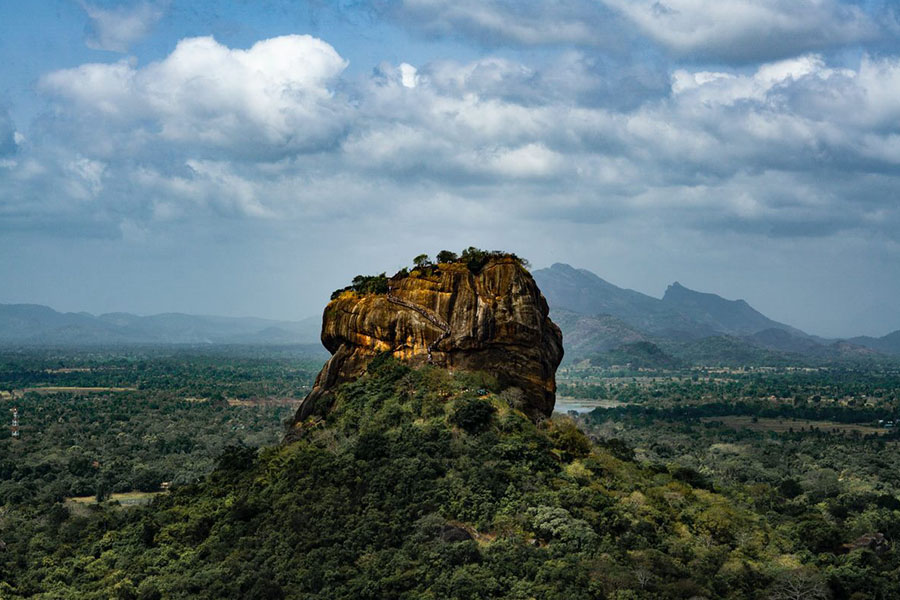 Between March and July, elephants gather around the waterholes to drink and socialise. You’re more likely to see them swimming between lake islands during the wet season.

January to May is the green season, with high chances of afternoon and night time rain. The lake is at its fullest and the bird life is amazing as all the migratory species are in residence. In the early morning there are spectacular views of cloud engulfed mountains. This is when it’s more likely to see elephants swimming.

June to December is the dry season, and as the year goes on the lake subsides and exposes parts of the lake floor where fresh grass grows and attracts large herds of elephants. The days are hot and the nights are cool. 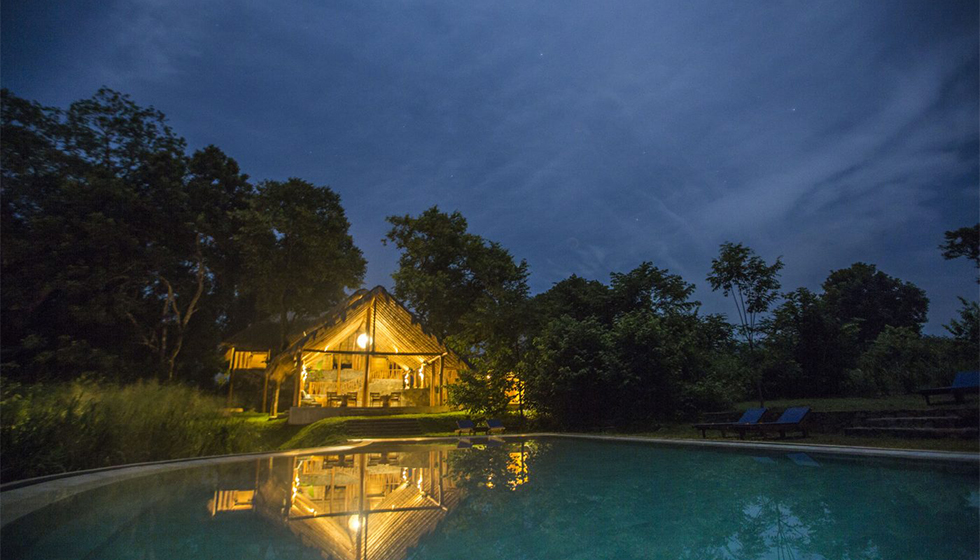 Positioned on the edge of the relatively untouched and least explored national park in the heart of Sri Lanka, this unique, sustainable lodge offers the chance to get back to nature.

What is the accommodation like in Gal Oya National Park?

Off limits for many years and rather off the beaten track, Gal Oya is slowly becoming the place to head to for a true wilderness experience with accommodation to match. There’s no mobile signal or access to the internet here making it a blissful escape from the modern world. Whether staying in a seasonal tented camp or eco-lodge in rustic luxury, you’ll be looked after by a private naturalist and friendly staff who take care of your creature comforts.

With a variety of activities on offer from jeep safaris and riverside picnics, to bird walks, cycling and hikes in the hills, Gal Oya is a perfect destination for families who enjoy the great outdoors and getting back to nature. With no access to the internet or mobile signal it’s great for enjoying some screen-free time together as a family. A private guide helps you manage your time and keeps you safe, and days are flexible depending on how everyone’s feeling. Gal Oya comes into its own in the dry season which coincides with the European summer school holidays ready for your next family adventure.

Is it possible to combine a trip to Gal Oya with other areas of Sri Lanka?

While the final leg of a journey to Gal Oya is on a rough road, the park is reasonably well connected to some other fabulous places of interest. It’s only three and a half hours drive from Kandy and Sigiriya in the Cultural Triangle, or the Hill Country, and less than that to Yala National Park as well as some stunning sandy beaches on Sri Lanka’s east coast. Get in touch to discuss your ideas and hear our recommendations so we can put together the best itinerary for you.